How One Shot Helped Me with the Design of Memories

I’ve been struggling with some of the design elements of how this game should work.  I knew that I wanted the main character to be able to interact with the environment and somehow regain her memories.  But how was that going to work?  Was it going to be through some sort of battle?  I mean, I am building this game with RPG Maker, and battles tend to be part of RPGs, right?

Then last weekend I played through One Shot. (If you haven’t heard of One Shot, don’t look anything up about it, just go and play it! It’s super good!) At a very basic level, One Shot is a puzzle/adventure game made with RPG Maker.  You get to wander around, finding and using items, in a very non-violent way. Which was exactly the sort of thing I was wanting with my game, but didn’t know if I could pull it off.  But after playing through One Shot, I knew that I could. And more importantly, that I should because Memories is not supposed to be a violent game at all.

So here’s what I ended up coming up with: interacting with certain things will trigger a memory.  The memory will take you back to your house, and the screen will tint a colour as the memory unfolds.  I made a quick video so you can check it out in action:

I’ll admit, I had a heck of a time getting the screen to go back to normal.  The problem was a really stupid one: you have the option to tint the screen OR to tint a picture. 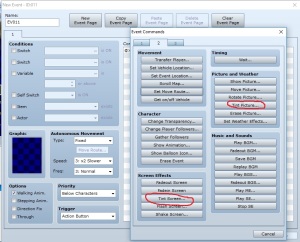 I didn’t notice this, so I kept trying to untint a picture, not the screen.  Once I realized what was happening, it was a super easy fix.

In case you’re wondering, here’s the two parts to the tint event:

They’re running as a parallel process to other events.  The first part gets triggered as the player is transported to the house.  The second part (which restores the screen to normal) is triggered at the end of the event that has all of the dialogue between the girls.