Last week I got a message from Black Chicken Studios about their new Kickstarter, Victory Belles.  I read the blurb and thought it sounded pretty neat – a dating simulator set in WW2, where the major warring factions are forced to team up and fight a bigger threat, the Morganas.  Being wholly unfamiliar with dating simulators, I was picturing some kind of intriguing visual novel-style game where people of the different and often opposed factions were teaming up to fight this new threat.  (I was thinking of something similar to Voltage‘s My Killer Romance or the hilarious White Lies and Sweet Nothings, both of which I tried a few years ago to get a feel for the genre).  But then I watched the Victory Belles Kickstarter video, and realized I was somewhat mistaken.  The Belles of the title are the spirits of warships likened to valkyries or kami and you get to collect them into a fleet to battle this new foe.  Oh, but don’t worry, you can still date the ships (it IS a dating sim afterall).

After watching the video, I realized that all of the Belles were female.  This led me to wonder about ships and how they are gendered in English to be a “she.” I don’t know if this is true as much nowadays (Grammarphobia said back in 2010 that doing so has become quaint; “it” and “its” may be replacing “she” and “her” in English).  Leading further from that thought, I also started to wonder if other languages gender their ships the way we do (or did) in English.

Not knowing where to look, I turned to Google with a couple of vague searches like “do other languages refer to ships as she.”  This was really frustrating because it brought up a lot of links talking about why ships are referred to as female in English.  But then on Yahoo Answers, one of the answers I found noted that in Russian, ships are masculine.  Following up on that, I managed to find this discussion here, which confirmed that generally Russian ships are masculine.  There are some exceptions, like submarines.  This is apparently true in South Asian cultures as well (ships=masculine, submarines=feminine).  So it looks like I have my answer: other languages do gender their ships, but do not always refer to them as female.

During this research, I was chatting a bit with my friend at Black Chicken Studios.  I posed the question to him, and he said that the German Bismarck “was considered so powerful that the Germans decided that only a male could have such power.”  A WW2 German ship referred to as a male?  How interesting.  I asked if they’d made the Bismarck into a Belle.  He said no, the Bismarck wasn’t commissioned in 1939 and so will not be appearing in the game.  Which made me sad, because I really wanted to see the masculine Bismarck interpreted as a Belle.  I guess I’ll just have to settle for the Russian Kirov instead. 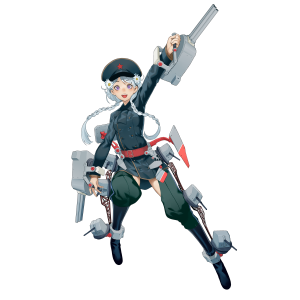