Last week, we unfortunately had someone drop out of the podcast I’ve been co-writing at work.  That meant we had to shuffle the cast a bit, which resulted in me being bumped from one of the side characters (Charlotte) to one of the main characters (Kaitlyn).  And we’re recording some of the Kaitlyn scenes Monday (ie yesterday)!

Cue me freaking out a bit.  I’ve been ready to play Charlotte for months now.  While writing the script, I could picture her voice in my head.  I knew her.  I could nail her dialogue.  But Kaitlyn was written for someone else.  While writing I was picturing her as the other actress, trying to tailor the words to her.  And suddenly Kaitlyn is me!  What do I do???  I’m not Kaitlyn!!!  😨

Well, one of the best things I did in the middle of freaking out a bit was message an actor friend of mine for some advice.  What do you do if you’ve been preparing for one role and suddenly given another one.  He sent me the most wonderful reply (thank you again, Kevin!!!) telling me to find the commonality between me and the character, and make sure I bring myself to the character.  So with that in mind, I spent a few days trying to figure out who Kaitlyn is as a character and how exactly we can connect.  And then I started playing with the dialogue a bit (that was an idea I had based off talking to my friend Scott about how Anthony Hopkins prepared for Two Popes), trying to deliver the lines in a way that is still me (I’m not going to lie, I also tinkered with the dialogue here and there if I had trouble saying something as it was written, too).  Between all of this, by Saturday night, I felt like I had a feel for Kaitlyn’s voice.

Kaitlyn’s character has changed a little bit in the process.  We originally wrote her to be more monotone and sarcastic, particularly with her humour.  But now that I’m the one delivering the lines, especially opposite the other main character, Darryl (who is absolutely ridiculous; he’s voiced by my co-writer, Derek), the monotone sarcasm felt hollow.  I found myself delivering a lot of the lines with a hint of laughter and light teasing instead of sarcasm as I was practicing over the weekend.  So the podcast is going to have a different Kaitlyn than originally envisioned, which will hopefully be ok!

Thankfully recording yesterday went really well.  Lisa, (another co-worker who was doing the recording), said Derek and I sounded really natural – the dialogue flowed well and sounded like a conversation (bonus points for our writing! 😉 )  We actually recorded more than we thought we would yesterday, which was another bonus – I can’t wait to hear the finished product! 🙂

It’s going to be a bit though before it’s available; while the scenes that just feature Derek and me are done, we’ve got a few more recording sessions scheduled.  There will be one for my character’s monologues, a few for a few other character monologues, plus a few involving almost the entire cast!

I’ll post more updates on this project as I have them. 🙂

#WriteTuesday – Slowly Getting Back into the Swing of Things

Alright, so the holidays are over!  Time to go back to regular life.  Now I don’t know about you, but sometimes I find getting back into a routine to be a bit of a struggle.  So I’ve been quite proud of myself, that I’ve managed to fit in some editing over the last week.  I was able to send one chapter back to its author, and now I’m working on another one.

Other than that, I was also really glad to get some stuff done around the house.  I cleaned up my Christmas decorations (as well as my kitchen in general). It’s always a bit sad to put all the decorations away, but now my place (especially my kitchen table, which doubles as my desk) feels a lot less chaotic; hopefully that will also help me get a bit more work done!

Hopefully this week will be even more productive. 🙂

lol, holiday season does stretch on for a bit on my family.  Today is Ukrainian Christmas; last night, my family had our last big dinner of the season.  We have 12 meatless dishes as tradition demands, but we’ve modified things a bit, having some traditional dishes (like kutia, borscht, meatless cabbage rolls, and perogies) and some non-traditional ones (I asked for more vegetable dishes because the whole meal is usually such a starch overload!)  My immediate family also has our own tradition: we started opening stocking presents on Ukrainian Christmas Eve as well.  This tradition has actually morphed over the years – originally we all spent $20 on everyone, but now we’ve made it a Secret Santa, and donate the extra money we would have spent to charity (every year a different person chooses the charity – this year was my sister-in-law’s choice).  Finally, we’ve changed it again: instead of buying something, you make something (with the same $20 limit for materials).  🙂

So once again I didn’t do much writing over the last week (although I did fit in some editing). But holiday season is mostly over, so hopefully I’ll have more to report next week!

As last week was Christmas Eve, I wasn’t paying attention and forgot to post on Tuesday; I didn’t want to make the same mistake this week, too, even though it’s New Year’s Eve.  As I’m sure we’re all busy with the holidays, I wanted to wish everyone all the best for 2020!!!

I’ll hopefully get back to posting regular #WriteTuesday posts next week. 🙂

#WriteTuesday – Back from Vacation!

Last week I was on vacation in Florida. 🙂  My parents and I decided to go as our Christmas present to one another.  We had a lot of fun at Madeira Beach (we stayed in the same condo as when we went three years ago).  I took a ton of pictures (I brought both my Pentax and Nikon; I filled up two SD cards with the Nikon!)  I’ll be working on getting them all uploaded to Flickr over the next week; so far I’ve uploaded my favourites from the first two days to Flickr; check them out here: 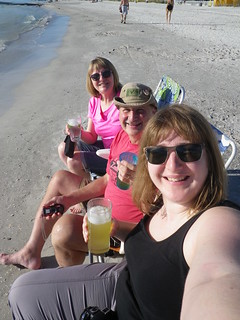 This album will be updated as I upload more pictures this week, too! 🙂

I even brought some minifigures with me to Florida (and bought a few new ones – I didn’t realize there was a new series of Collectible Minifigures out!)  I haven’t taken any Lego pictures in almost a year; it was a lot of fun to bring them back out.  Next time I’m at a beach or pool I’ll have to make sure I have some Lego lounge chairs and wine glasses to get some really fun pics!

Over the course of the week, I didn’t do a whole lot of writing.  But I did a whole bunch of reading.  I read three short novels, some short stories (some were in a copy of Uncanny Magazine that I had on my Kindle; the others were standalone shorts), and a bunch of magazines.  It felt really good to read some fiction again!  I ended my vacation by starting a nonfiction book I’ve been wanting to read (Stress Less, Accomplish More by Emily Fletcher), which I’ll hopefully be finished soon, too!

So how’s your week been?  Have you done anything exciting? 🙂

Sorry everyone, this weekend was super busy. #WriteTuesday will return next week!

Have a great week! 🙂

I’m so excited – I finished the first rounds of edits on one of the book chapters last night!  This particular chapter has taken almost 20 hours of work to get through, which was crazy (the next biggest time commitment chapter took just over 10).  Part of that was my fault – I did some research to fill out the chapter and make it more readable (it dealt with things that I knew the answers to, or at least where to find the answers).  But now that it’s done, I’m feeling pretty on top of things; it’s now up to the authors to review my suggested edits. 🙂

How’s your week been?  Up to anything exciting? 🙂

An Acquaintance with Letters
Blog at WordPress.com.