Event Stuck on Another Event!

I was working on another cut scene and I had the weirdest thing happen: one of my events got stuck trying to move through a second event. I ended up making a video explaining the whole thing:

If you don’t feel like watching the video and would rather read about what was happening, basically the guy on the left was getting stuck on the guy on the right. 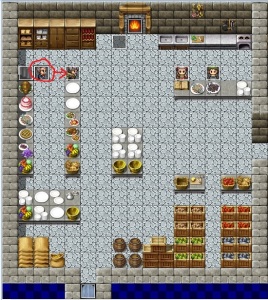 The event/guy on the right happens first and then is over.  That event becomes invisible, and I made sure it’s marked as being under the player.  I assumed that a second event would be able to walk over it, too.  But that’s not the case.  Luckily it’s super easy to fix this problem.  When I made the event/guy on the left’s move route, I had to make sure “through” was turned to “on.” 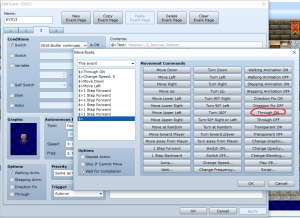 Make sure you turn “through” on and not “transparent” on.  I made that mistake once while messing with the settings to make the video and he (obviously) disappeared!

Like I said, it’s super easy.  Kind of like getting the screen to go back to normal after a tint…(hint – use tint screen, not tint picture!)

Oh, one important note: you have to turn “through” on for every move route on a different page of an event.  I turned it on for this guy when he walks from the left to the right, but didn’t turn it on for when he walks right to left; the first time worked fine, but then he got stuck on the event the second time! Also, make sure you turn through on at the beginning of the move route; it won’t really help you if it’s at the end of the list of commands.

You probably noticed that this video is a lot more involved than the previous ones I’ve made regarding RPG Maker VX Ace (it has voice over, multiple video clips, and some pictures!) Because I knew I wanted to show several videos together (specifically the guy getting stuck on the event, and then the guy being able to walk through it), I ended up buying myself Movavi Video Editor.  I was playing around with the trial version, and decided that it was well worth buying, especially since I keep making blog posts with videos about RPG Maker VX Ace tips.  I also just turned my last post where I talked about screen tinting into a video because I wanted to play with Movavi’s highlighting effects.  You can check it out here:

I don’t know why, but for some reason I keep having two witches pop up when I’m play testing Tears of the King! 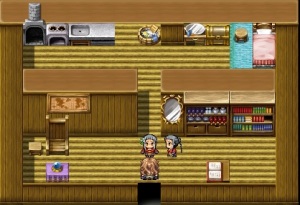 To solve a stupid problem I had with Tears of the King, I ended up making the witch into two separate events.  The original event (which worked fine) had her moving out of the way of the hallway, letting you go and grab something from the chest in her room.  The problem was that one time she moved over and I accidentally exited the house.  But then when I walked back in, she was standing in the way again and wouldn’t move because that part of the event was done; I wasn’t able to get to the chest.  The same thing happened with my woodcutter (it’s this video if you don’t remember); he moved out of the way but when I went into the forest and came back out, he was standing in the way.  So like with the woodcutter, I split the witch event into two.  The first event walks over to the second event, there’s a bit of overlap when they’re both standing there (you can’t see it because they’re in the same pose), then the first event disappears and the second one takes over.  But for some reason the second event shows up before it should!  The weird thing is that it’s not happening all the time.  Every time I think I have it fixed, the second witch pops up again.  Currently she isn’t popping up, so I’ve got my fingers crossed that I’ve solved the issue!

Okay, I’m really proud of myself.  Remember when I said I had taken the NaNoWriMo blob apart?  At that time, I said my next step was to consolidate all my notes on Faeriia.  Well, this week I started to do just that!

All told, I had about 28 pages of notes on Faeriia, and this week I’ve managed to edit and organize about 12 of those pages.  And let me tell you: I’m falling in love with this setting all over again!  Prior to 2015’s NaNoWriMo, I had a Google Doc on the setting that was ridiculously vague and only 2 pages long.  It’s now 14 pages long, encompassing some stuff on the world’s history, various religious beliefs, the world’s magic system (thank you again, Brandon Sanderson – you’re blog posts on magic systems helped me with this once again during NaNoWriMo!), dragons, and daimons.

Still to be sorted: more history (specifically some big wars), the social organization of some of the denizens of Faeriia, and some notes on other denizens of the world, and a few notes on specific characters.  I don’t know how much time I’ll have for this stuff, but hopefully I can get it done in the next two weeks!

For comparison, my Imezza document on Google Drive is 9 pages long (but I haven’t thought through the world’s history in the same way as I did with Faeriia) and City of the Dead is 8 pages long (I have some history of the world, but not as detailed as Faeriia’s).  So I guess Faeriia is currently my most detailed world.  But it’s also the world that several older stories I’ve had from the past fit into, so in a way it’s no wonder it’s so much more detailed.

Oh, I also wanted to mention that tonight was Write NOWW, a panel that was held at a local coffee shop.  My brother was the moderator, and it featured blogger Dahl Botteril, comic artist Bry Kotyk, and blogger Leah Wellwood (who are all local people).  It was interesting to hear from different local bloggers and my brother did a fantastic job moderating (as usual!) 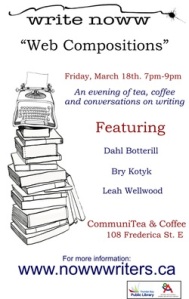