My friend playtested Memories over the weekend!  Overall he liked it (he called it a “nice, heartful story”). 🙂  He found a few mechanical things I needed to fix, like how locked doors would open, display the text “the door is locked” then close (he helped me fix that!) and how the ending was a bit weird because after the credits it said “Game Over;” together we figured out that you could send the game back to the Title instead of using the Game Over command, so I’ve implemented that instead.

He also said he really liked how you get more and more dialogue options with NPCs as you unlock more emotions, so I’m super glad I got some of that implemented before he playtested!

So since then, I’ve been working on implementing more of those dialogue choices.  I think I’ve got pretty much everything in place now (there are still a few places where there isn’t a dialogue choice, but I don’t really think they’re needed).

Over the weekend I also noticed a problem with my naming scheme for all the characters.  Here are their names again:

When I designed this, I tried to have people who were related to each other have names with the same starting letter.  I thought I did a good job of this, but I just noticed that the wizard name (Edric) starts with an E, just like my mother daughter combo of Eireen and Ena! 😦  Unfortunately, these names are kind of ingrained in my head now; I took a look last night and couldn’t find anything else that worked for any of them.  So in the end I decided to leave them as is.  Whoops!

So now that the dialogue choices are all in place, I need to actually go back and make sure the dialogue works for each character (and that each character actually has their own voice).  Once that’s done, I think Memories just needs a better name then it’s pretty much finished! 😲

Over the last month or so, I’ve had a couple of different people ask me for game writing samples.  I directed them to my main website, shaunakosoris.com, so they could see what I had readily available.  Unfortunately in both cases, my available samples did not meet their needs (one person requested samples with romantic dialogue, while the other was looking for non-fantasy samples). Currently on my website, I have three samples: two are character biographies that were developed for different games, and the other is made up of actual scenes from a game (mainly dialogue with a bit of branching narrative).

I have written a couple of pieces over the years that I think would have better met what these people were looking for. Unfortunately I am unable to showcase them as samples.  So I decided to set to work remedying this.  Two nights ago I went looking for writing prompts to use as a starting point.  I was specifically looking for more of a real-world idea, but ended up finding a fun romantic dialogue prompt instead.  I was going to write the sample in Chat Mapper, with the intention of exporting it as a .rtf (I was really hoping to see what the output would look like with branching dialogue).  Unfortunately I don’t currently have access to that capability, so I had to use a different program instead.  Last night I played around with TyranoBuilder a bit, thinking I could build it there, but I don’t think there’s a way to export the dialogue (and I wasn’t planning on writing an entire Visual Novel, although that might be something to try in the future).  So I ended up writing the first draft of the sample in Word. I had a lot of fun writing it (it’s currently over 900 words!) I’m hoping to get it edited and up on the site over the weekend. 🙂 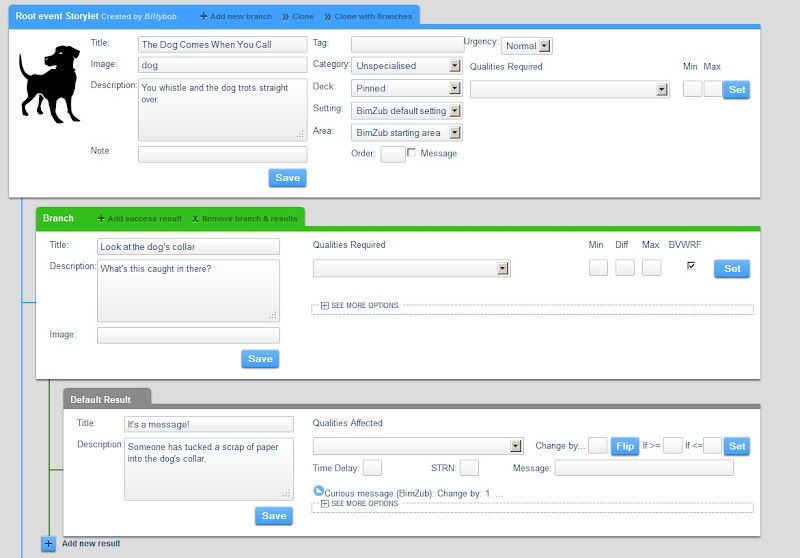 I didn’t post about it at the time, but I did a lot more development on Tears of the King last night.  I ended up building the caverns below the mine.  There are two caverns you walk through, which lead you to a much smaller lava cave.  There you find one of the ingredients you need, which causes a boss fight (still slimes!).  I stayed up way too late building all of this, but I’m super happy with how it all turned out, especially the lava cave:

Today I haven’t done as much, but I did manage to get some looped branching dialogue into the game, which was pretty exciting.  I added some really simple branching dialogue yesterday after my friend played through what I had at that point.  A priest in the starting village asks you if you want to know more; my friend did, but there was no option and no other dialogue.  So I put a little something in place for now.  So today I decided to put some NPCs in Storm Point (that’s one of the towns).  When I got to the church there, I put in a bit more extensive branching dialogue (there were three choices instead of just two).  But when I tested it I discovered the dialogue would end automatically after you read through one branch.  That really didn’t work in this case, so I had to play around with Loops.  Using a Loop means you can go back to the choices after you play through the dialogue options.  Here was what I ended up with (just playing through one branch):

Here’s how you make this happen:

Here’s a simplified version of what your event page should look like:

When I was trying to make this work, I started with writing the choices, then tried to make a loop happen afterwards.  If that’s the case, you can just cut the whole choice and paste it into a loop.  Don’t forget to put the Branch End in or else the dialogue will never be able to end!