Knowing that I had weekend plans, I made sure I started editing a bit sooner during the week (rather than wait until the weekend as I normally do). I got sections 30, 38 and 39 edited last Wednesday; I was pretty proud of myself – that was after a full day of work! I sat down to edit the remaining four sections (40, 41, 44 and 45) on Saturday in the evening; I got through them pretty quickly and decided to keep going! In the end I edited five more sections (37, 42, 43, 47 and 48).

I also waffled back and forth as to whether I needed to add some new sections to the story. Both sections 30 and 38 lead into the same options, but earlier in one of those story lines, you had already met some characters who show up again, while in the other story line you hadn’t. When I wrote the sections that follow 30 and 38, I guess I wrote them from the perspective of you not having met those characters. But while editing, I realized that if you had met the characters already, it was rather awkward to reread their descriptions  again. But the descriptions were needed if you hadn’t already encountered them! My first thought was to just add new sections so that the story line where you hadn’t met the characters got the description and the one where you had met them didn’t. But if I did that, I was pretty much duplicating about 8 sections to change maybe two lines of dialogue; that did not seem ideal! So in the end, I just simplified the text as much as I could rather than duplicating that many sections.

So here I am, over 3/4 of the way through! As I mentioned last week, this week I’m on vacation from work; I’m going to push to finish editing these remaining sections this week. Wish me luck! 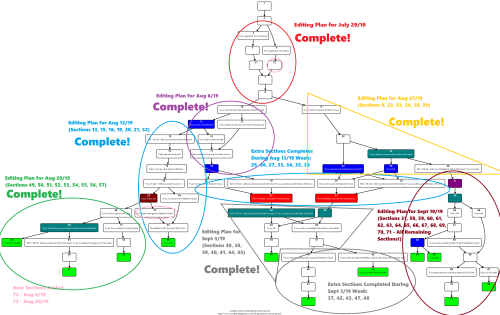