One week later and I’m still plugging along on the edits to the Make Your Way story. 🙂

Last Wednesday I got sections 10, 11, 12, and 14 all edited.  Then I finished off sections 17 and 18 yesterday.  No new sections have been added to this chunk of the story with the edits; the story remained the same, it just needed to be fixed up a bit.  I found sections 10, 11, 12 and 14 all relatively easy to edit because they were all pretty straightforward.  17 gave me a bit of trouble just because a lot of my descriptions were really awkward (which is why I didn’t continue with it on Wednesday).  But when I worked on it yesterday it didn’t seem too bad, and I got section 18 edited pretty quickly.

So here’s the plan for the next week: editing sections 13, 15, 16, 19, 20, 21 and 32. I considered moving to the right side and starting those edits, but it made more sense to me to fix up the one side of the story first before moving onto the other. 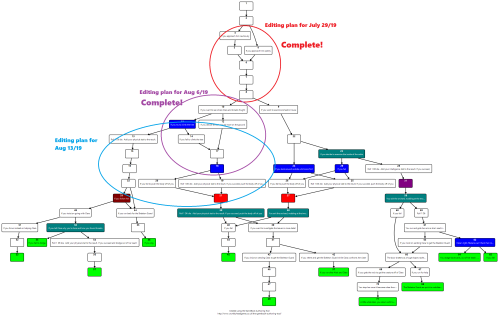 I’m also working on a project at work that I’m really excited for.  Me and a coworker are writing a radio drama-style podcast for the library. He has been writing the first drafts then I’ve been going back and editing them. We’ve got the first four scripts done, and 5 and 6 are written as first drafts (I’m now working on editing them this week). The one problem I’m having is that it’s getting harder and harder to leave the podcast at work (even though we’ve both agreed that we’re only going to write it on work time). The current plan is to have all 10 episodes written for the fall; we want to do a read through with all of the cast in October, with the hopes of starting to record not long after that. I was going to be voicing one character, but after writing it, I now really, really want to voice a different character. I’ll give you another update on the podcast once all of the scripts are written. 🙂