Happy long weekend everyone! I hope you had fun. I went out to camp for a few nights, spending a lot of my time swimming, fishing, and reading Sharon Shinn’s Unquiet Land, the fourth (and final) book in the Elemental Blessings Series.  It was a great weekend!

With the long weekend coming (and my nights filling up with plans), I was a bit worried I wouldn’t make time to continue the edits on the Make Your Way story. But on Thursday night I managed to sit down for a little bit (despite my cat’s annoyance that I was writing rather than entertaining him). During that time I edited sections 3, 4, 5, and 6, which all involve the main character meeting another character, Clara (the reader gets to decide if they approach her openly or cautiously). I ended up adding a new section to the story (72); now section 4 moves into 72, which then connects back to the main story at 7 instead of 6.  I’m so glad I made this change!  When I originally wrote these sections, they were way too similar.  With the new section added, they’re now a lot more distinct (originally you kind of cautiously tailed Clara for a bit before deciding to approach her, no matter which option you chose.  That definitely doesn’t work if you want to approach her openly!)

I brought the story with me to camp, but didn’t end up working on it there (thanks to reading Unquiet Land instead).  So after unpacking and hanging out with Merlin, I got to work on editing the final two sections for this week.  With that done, I chose the next section of the story that I’m going to work on (I went with another 6 sections since that’s the amount I worked on this week). So here’s the new plan: 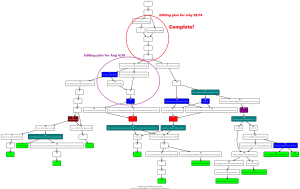 So what have you been up to? I hope you had a great weekend!