#WriteTuesday – What I Did on My Vacation

Apologies everyone – I was a little bit confused as to what day it was and wasn’t thinking about posting on here.  Luckily it’s still Tuesday (just a little later than I was planning on posting!)

So last week, when I was taking some me time, I was also on vacation from my day job. 🙂  The week off was fantastic – I made as little plans as possible because, as I said last week, I wanted to slow life down a bit and get caught up on some things I’ve been putting off.

Last Tuesday was #GivingTuesday. I wasn’t expecting it, but bUneke Magazine asked for all their volunteers to post on Instagram their #givingstory.  So I shared this picture to Instagram, Twitter, and my personal Facebook page (although the latter two weren’t flipped like Instagram’s was).  Once I was finished with that, I decided to keep working on some Sustainably North stuff.  For yesterday’s Sustainably North post, I wanted to recreate the paper wreath that I put up on my door this year (I included a picture of it with my November column in bUneke Magazine).  So I made a brand new wreath last Tuesday, and took a lot of pictures of all the steps for making it.  Then for next Monday I wanted to talk about the banana bread I also pictured in that column (it’s my grandmother’s recipe).  So on Wednesday I installed WP Ultimate Recipe to Sustainably North. I did a bit of research because I knew I wanted a professional looking recipe post on the blog – Shivar Web recommended WP Ultimate Recipe.  I installed it and tried it out; it seemed to work fine so I stuck with it.  I then baked some banana bread to take pictures of the entire process (although I barely used any pictures for the actual post, which will be on Sustainably North on the 10th), and later wrote and scheduled the post.

While taking the pictures of the banana bread, I was having a bit of trouble with my flash because I was getting a shadow from my camera.  I ended up trying out a flash diffuser my dad gave me some time ago and it worked like a charm! 🙂 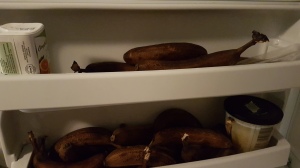 This was my freezer door last Wednesday night!

Oh, and I also need to give a shout out to my friend who provided the walnuts for Wednesday’s banana bread baking!  I always forget that the recipe calls for walnuts (and is way better with walnuts) and I never seem to have any on hand (although I have a freezer door full of bananas).  When I texted her to ask if it was okay that the banana bread wasn’t going to have any (she was waiting to help me eat it), she said she had some “nut pieces,” which turned out to be walnuts!  🙂

After that, I started working on a draft of a book review to post on Sustainably North on December 17th.  Once that’s done, I’m going to talk about the article I wrote for the December issue of bUneke Magazine (I feel that it’s a perfect topic for Christmas Eve), then do another Article Roundup for December 31st.  And that will get me through until the new year!

I’ve been pushing to get all of these posts written for Sustainably North because I really want to reassess what my plan is for the next while.  Back in June I made a plan for the rest of 2018 on Sustainably North.  And then I proceeded to completely ignore that plan and kind of wing it.  I know that things did change a bit because I wasn’t expecting to be writing a monthly column in bUneke Magazine.  But now that I’m feeling rather on top of things again I think it’s time to stop running by the seat of my pants.

Wednesday was also when I started reading Will Write for Food by Dianne Jacob.  While writing the banana bread recipe I realized that I had no idea how recipe writing was actually done….so I read a whole book on food writing.  Most of the book wasn’t very relevant to my needs, but I found it pretty interesting to read all the same.  Once I finished it on Saturday, I went back and edited the recipe on Sustainably North; I feel a lot more confident about how the post and recipe look now. 🙂

Saturday ended up a rather productive day because I also edited and scheduled the book review for December 17th for Sustainably North.  That means I’ve just got two posts left to write and schedule for 2018!

The new issue of bUneke Magazine came out on Saturday, so over the last few days I’ve been reading it over and scheduling Tweets about it for @SustaintheNorth as I do every month.  Once that is done, I’m going to take a break from Sustainably North to actually think through that City of the Dead worldbuilding stuff and hopefully get on with that story for the Make Your Way anthology.

Oh, and I almost forgot – I had a book review published in the Chronicle Journal on Sunday (republished on TBPL Off the Shelf yesterday) about Patricia Briggs‘ Cry Wolf.  I actually read Cry Wolf last year and have been hanging onto this book review as a spare.  Over the last few months I’ve been reading a lot of nonfiction books that the library didn’t have, so I felt now was a good time to use this review.  Also regarding TBPL Off the Shelf, this month’s author interview is going to be a bit later than planned (thanks to me being off last week) – I’m hoping to get it posted tomorrow night, but it may have to wait until a bit later in the week.