Michael Claudius the 3rd was an interesting character to develop.  I knew while designing Martin Ryker that Claudius was the villain Ryker wanted to take down.  The problem was that Ryker himself isn’t exactly the “good guy” of this story.  I knew he was pretentious (he makes sure everyone knows he’s from old money with the whole “the 3rd”), but that was about it.  Then on Saturday, Shaun showed me this picture he’d created: 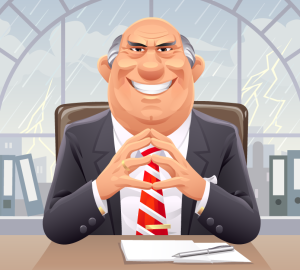 Yeah, that definitely doesn’t look like a good guy.

I wanted Claudius to have the first name “Michael” because it is supposed to mean “Who is like God?”  I took that literally in the sense that he is very full of himself.  His last name changed a few times, starting out as Costas, or Costel, changing to Constantine, and finally settling with Claudius.  The three previous names all mean “constant” or “steadfast;” I was initially thinking of using “constant” in the slogan for his company.  But somewhere along the way his name changed to Claudius (I believe that was at Shaun’s suggestion, but I can’t remember now).

Claudius Capital was an interesting thing to name as well (and I can’t take final credit for it – that was Shaun’s suggestion as well).  I had to look up investment companies to see how they are named first.  A lot of companies have a form of “invest,” “trading,” or “brokers” in their names.  So I was going to name his company “<his name> Investments.”  But then Shaun suggested Claudius Capital, which has a nice ring to it.

I didn’t worry too much about Claudius until Sunday, when we decided to make a trailer for the game, and later the Twitter page (we came up with the Claudius Capital slogan while making his Twitter page – I’m still not sure who in their right mind would actually invest with his company with that slogan!)  As I mentioned the other day, we used his Twitter account to justify some design decisions/lack of functionality for the demo.  I didn’t pay too much attention to voice, other than letting him make ridiculous and over the top pronouncements using hashtags.  He also has no dialogue, so I didn’t have to worry at all about his voice in the game.

All in all, Claudius was a fantastic collaboration.  He wouldn’t be who he is today without the help of my team (esp Shaun)!