Over the last week, I have created a few new maps for Tears of the King!  I’m pretty excited for them – I think they’re the first new maps in a year and a half. 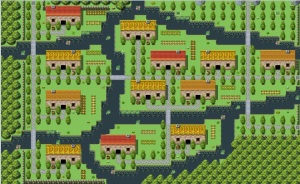 This map is loosely based off of the Kingdom of Pandora city in Secret of Mana in that it is built on a couple of islands.  Plus there will be a castle you can go into (you can see the base of the towers) in the top right of this map, again like the Kingdom of Pandora.  That similarity was due to the way I laid everything out (and because I didn’t want the castle to be physically in this map). The castle isn’t built yet, and neither are the insides of the houses.

The Imperial City should be the final city in the game.

Also here’s a dock, complete with a ship! (I had to buy extra tiles to make the ship happen). 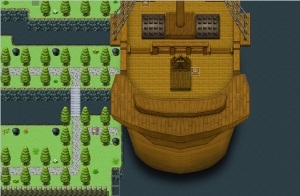 You reach the ship through either of the two paths in the right side of the Imperial City.

So what’s next?  I have some more maps to build (the castle, the insides of the city houses, and an island where the ship will eventually take you).  But I also need to go back over my notes and actually replay the game that I have made so far; it’s been so long that I only vaguely remember what still needs to happen.

There’s still a bunch of work that needs to be done, but I’m rather excited to see that the end (of map building anyway) is in sight! 🙂