I have created and named the NPCs you will encounter in Memories. Here they are: 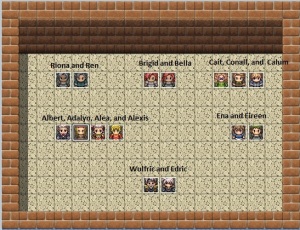 I don’t know for sure at this time that these will be all of the characters in the game (plus Briana).  But these are the ones I think I’ll be needing. I decided on the design of most of them over the last week, but I didn’t name everyone until last night (with the exception of Bella and Briana); it was rapidly becoming very tough to write dialogue without names.

I always try to give my characters unique names so there’s no confusion as to who is who.  I tried to choose names with an Irish or English  origin, in the hopes that the names will sound similar (and tie the characters together geographically).  But in this case I also decided to give people from the same families names that start with the same letter.  I think the names are, for the most part, different enough; I just hope that this won’t confuse anyone who plays the game!

Ten of these characters were created with RPG Maker VX Ace’s built in Character Generator.  The other five were chosen from the characters that come with the software.  You may actually recognize Wulfric from Tears of the King; I chose the same model for the Tears woodcutter (seen in the video in my Jan 2 2016 post).