The weather’s finally warmed up around here and I’ve had gardening on my mind for the last week or two. So rather than talk about the normal writing/video game/book sort of thing this Tuesday, I decided to talk about gardening instead.

Last fall I bought several shrubs for my back yard. I planted them beside the sidewalk in the back with the intention of building a garden where they were. 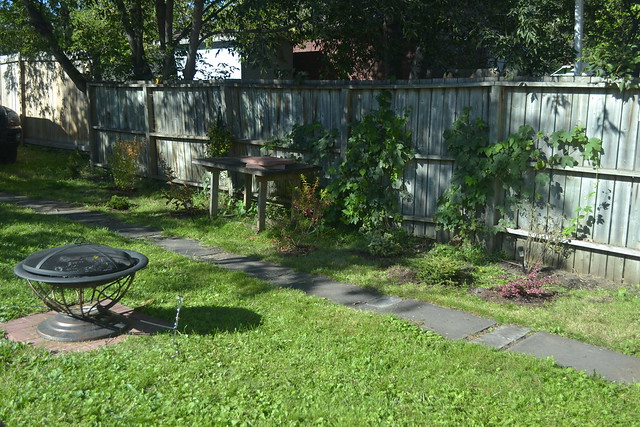 So this summer I started actually putting the garden in. I’m only going to make it half the size I was originally considering, so just from the right of the table. I’ve changed my mind about where I want most of these shrubs to be (most notably I planted a dwarf shrub BEHIND a non-dwarf), so I’m in the process right now of tearing out the grass and moving everything around. 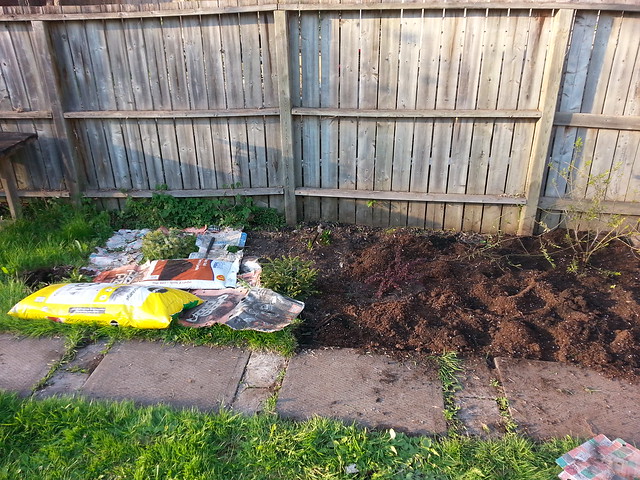 While I was trying to figure out where to move everything, I discovered that one of my shrubs, the Turkestan Burning Bush (Euonymus nana ‘Turkestanica’) may be an invasive species (it’s the shrub that I’ve now moved into the right corner in that last picture).  Or at least the regular burning bush (Euonymus alatus) is considered very invasive in warmer hardiness zones. Originally from Asia, this species has been spreading throughout eastern North American forests. Right now, its sale is prohibited in New Hampshire and Massachusetts; as far as I can tell it is otherwise still available elsewhere in North America.

I haven’t been able to find a lot of information on the Turkestan Burning Bush beyond very general care instructions and so cannot confirm or deny whether or not it is considered invasive. Apparently it is not native to North America (I’m not entirely sure where it’s from, but I’m assuming Turkestan?) But just because it’s not from here doesn’t mean it is automatically invasive. Invasive plants typically produce many seeds and do not have many or any predators because they are not native to their new environment; as a result they are able to flourish, outcompeting against native plants. I found this list that details what makes a plant invasive if you’re interested in more information.

At this point, since I haven’t been able to find anything saying the Turkestan Burning Bush is invasive, I’m not too worried about having it in my garden. I’ve only had it since last fall, so I haven’t had enough time to see what it’ll do over the growing season.  But the City of Calgary’s 2014 pamphlet “Yard Smart Perennials” advocates having it in your garden, so hopefully I have nothing to worry about! But now I know that a plant’s invasiveness is something else to research before buying.