Ok, before I say anything else, I have had the Meta’s theme from Red Vs. Blue, “(When) Your Middle Name is Danger” by Trocadero, stuck in my head all week.  It’s a fantastic piece of music that I’ve listened to quite a bit in the past.  But I recently just re-watched Red Vs. Blue seasons 6-8, and yeah.  Here it is, for anyone who isn’t familiar with it.

So anyway, this week has been a crazy one with me trying desperately to get everything I need to before I’m off on an adventure next week.  My work is sending me on a four day trip to tour the Makerspaces of a nearby city.  I’m really looking forward to it!  🙂

Of course, that meant getting the next interview ready before I go, since I’m trying to run them at the beginning of every month, rather than on the second Wednesday of every month (which it was before – that just happened to be the day when the first one was posted, so I went with it).  But now I’m pretty much at the point where I just need to pack.  I feel bad to be leaving my Merlin (I always do), but he’ll be in good hands while I’m gone. 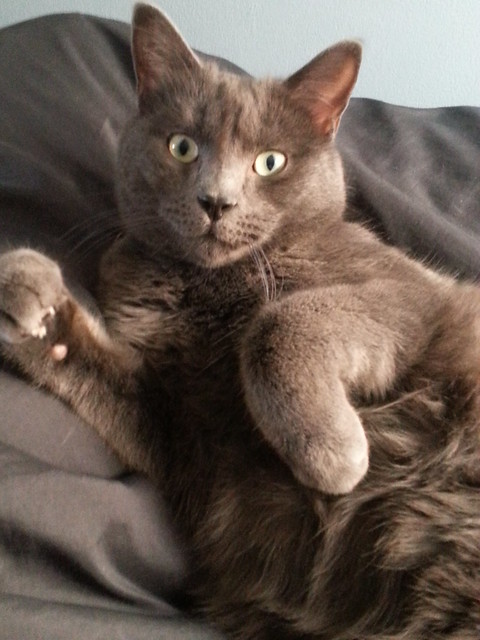 For the trip, I’m attempting to pack light.  But of course I’ll be bringing a notebook two plus my Kindle.  I’m currently reading Birdie by Tracey Lindberg, but I’m hoping to finish it tonight or tomorrow because I don’t want to bring it with me (it’s my brother’s book plus it’s hard cover).  I want to revise a story I wrote in the NaNoWriMo blob for a writing contest.  Unfortunately it’s nowhere near the 2000 words it needs to be, so it’s going to take a heck of a lot of work.  Including some background work, fleshing out the characters a bit more and whatnot (not the world, since it’s taking place on City of the Dead).  I’m going to take what I have and hopefully do some of that work on my off time while I’m away.

Oh, and on a totally unrelated note, last night was pretty exciting – my friend Scott of Guilty Pleasures Cinema asked me to reprise my role of Death.  I went to his place last night to shoot a few lines (Death was off duty, so I didn’t need all the makeup).  At the end of it all, we were talking about a movie idea he has, throwing some ideas around.  He told me I’ll have to come back so we can actually write some of this up.  So I may be involved in a local movie project in the near future!  🙂

So that’s everything.  Life continues to be busy, but at least for this week it was mostly a good busy.  🙂

Oh, and in case you were wondering, yes, I have been replaying that Youtube link of “(When) Your Name Is Danger” as I’ve been writing this.