Wow have I been busy with Tears of the King!  Last that I posted about it, I had just finished the Witch House Grove.  Since that time, here are the changes I made to it (which I mentioned in a comment on that last post): 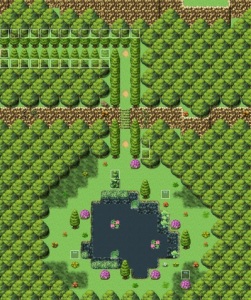 The main problem was the cliff that I wanted to incorporate.  This map attaches directly to the Witch House Hub, which means there’s a cliff a little below the entrance to this map.  So that’s in place now.  I also changed from the black forest to a bunch of oak trees because that’s what’s in this area; I’m going to keep the black tree tiles specifically for the fairy forest.

I’ve also made a new town! 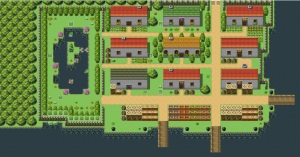 Currently I’m calling this place Storm Point.  I’ve already made it so you can go into all nine buildings; it’s just missing the people and things like that.

Finally, I also made a series of maps that take you into one of the towers on the Mountain Forest (that’s the huge map I finished back in August).  With those maps completed, Tears of the King now has full functionality through the first two ingredients!  I’ve cleaned up some of the early placeholder text as I’ve been working on things, too; the dialogue isn’t perfect, but the early stuff is a lot better than it was!  Oh, and one of the most fun things in the game is an event with the woodcutter I got working today.  The idea is that he swings his axe to knock down a tree that’s in your way.  I was so proud of it that I made a recording to show you!

So yes, that’s pretty much what I’ve been doing for the last few days.  The next thing I need to do in the game is build myself a mine!  Oh, and I guess finish that second big map I started…

(This picture is scaled in 1/4 and made from two separate images like the Mountain Forest was because it’s the same size).

2 responses to “January 2nd Tears of the King Progress!”