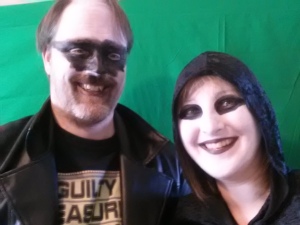 A friend of mine, Scott Summerton, runs Guilty Pleasures Cinema, which celebrates the movies you’re embarrassed to love and showcases those you might have missed.  A few months ago, he asked me to play Death in a couple of episodes.  Here’s the second of those two episodes:  GPC Episode 77 – I Come in Peace (1990).  This episode also marks the third anniversary of Guilty Pleasures Cinema!  🙂