Over the weekend I was away in Ottawa for a one-day workshop (it wasn’t game related).  While hanging out in my hotel room, I started designing the world of the as yet untitled game in map form.  I enjoy drawing maps so this was sort of a logical thing for me to do while working with this new game’s setting.  Of course, I decided to draw in pen rather than pencil, so I ended up designing the map on three separate sheets of paper; none of those were really the finished product (and one is more of a listing of words rather than an actual map now).

My plan was to redraw it once I got home and then scan it.  But somewhere along the way I had a better idea: why not just find a map-making program and draw it on the computer instead?

I looked into several programs, including Campaign Cartographer 3 (which looked pretty neat) and Dundjinni before deciding on giving AutoREALM a try.  Of the three, AutoREALM is covered under the GNU General Public License and was available as a free download, so having never designed a map using anything more complicated than Paint I decided it was the one to try for now.  I may consider giving one of the other programs a try in the future, but until then I’m going to play around with AutoREALM.

So anyway, after downloading the program and checking out a quick tutorial, I was able to successfully recreate the map I designed in Ottawa: 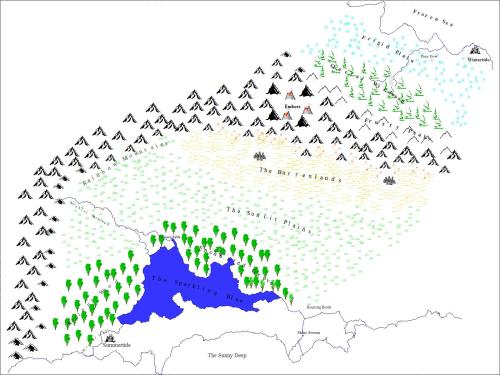 I know the map isn’t perfect.  Some of the areas are tough to read and the edges of the map are just white space because I didn’t design them.  But I had a lot of fun drawing this (both in pen and on AutoREALM).  I didn’t actually come up with all the names for things either; my programmer friend helped me brainstorm the place names while I was in Ottawa.

The best part about this map is that it’s helping me visualize the set-up for the game, particularly with the story and levels.  It’s giving me a great starting point for character backgrounds.  What’s more, the map also has some of the unique level-specific features of the game on it.  The final game might not be laid out like this, but at least I have a starting point.