Today I tried telling my family that no one really saw Crosby’s gold-winning goal.  It didn’t go over well.  Everyone was watching the TV when it happened, so everyone immediately argued with me that we all saw it because we were there.  As my dad said, “We saw it on the replay!”  He also made sure to point it out to me when we saw the replay once again on the news (connected with this story). 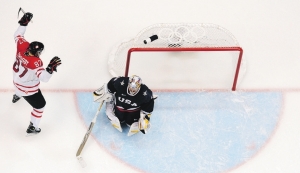 For my part, I had stopped trying to explain what I meant as soon as I was met with such opposition.  I mean, who am I to argue with what is ‘real’?  It is actally like Morpheus says: “most of these people are not ready to be unplugged. And many of them are so inured, so hopelessly dependent on the system, that they will fight to protect it.”  That’s what happened to me earlier today.  My family didn’t want to hear the “truth,” and so fought to protect the simulacrum.

One response to “Explaining the Crosby Goal”