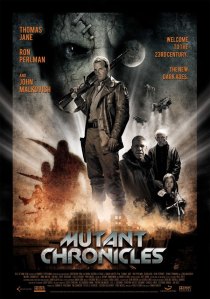 I found Mutant Chronicles while I was at work several weeks ago.  I initially didn’t have enough time to watch it, so I brought it back before borrowing it again; I finally watched it earlier today with a friend.

Mutant Chronicles takes place in the distant, steam-punk future.  10,000 years previously, an alien machine crash-landed on Earth.  It started turning people into mutants.  A hero and his followers were able to seal the machine away and their descendants have guarded the knowledge of the machine.  But now, the seal has been blasted open during a skirmish between two warring factions, awakening the machine.  Once again the mutants are spewing out of it, killing, maiming, and making more mutants from the fallen.

A monk, one of the people who guards the knowledge of the machine, has assembled a team to go on a suicide mission in an attempt to destroy the machine.  He is following an ancient prophecy that there will come someone who will save them from the mutants and the machine; the monk believes he is that man.  They have with them a piece they took from the machine millenia earlier, which they believe is a bomb; unfortunately they do not have the key to activate it.

What was most interesting was the way the mutants themselves behaved.  My initial reaction was that the mutants were controlled by some sort of hive-mind consciousness that directed them to only attack men.  There was a scene early in the movie where a woman and her child were caught between soldiers and mutants; the mutants ignored the woman and child, attacking the soldiers.  Of course, I assumed at the time that they were directed to go after the threat.

Another thing I noticed was that all of the mutants seemed to be men.  While not caring too much (it is a B movie afterall), I thought it was a bit sexist.  But otherwise, I assumed that the mutants were rampaging around the planet, slaughtering everyone to make more mutants.  This is reinforced by the majority of the population evacuating the planet, heading to Mars in a desperate attempt to escape and survive.

But after the movie was over, my friend and I started discussing some of these things, and we discovered that the movie is a lot more complex than it first appeared.  This all stemmed from the mutants’ behaviour.  There is a scene where the monk’s team is in a ruined city.  While hiding, they see a small group of mutants head into a building.  When they get to a large, open area they discover a large mob of refugees consisting of women, children and the elderly trying to board a ship to Mars; the mutants had come from this direction, but apparently left the mob alone.   This was reinforced by a shot of a lone mutant on a rooftop, watching.  If the mutants were slaughtering everyone, they would have easily destroyed this group of people, but they left them alone.

The second odd instance concerns a scene near the end of the movie.  The monk’s team consists of two women, both of whom are relatively good fighters (one of the women accompanied the monk throughout the movie and was absolutely amazing with a sword, while the other one usually fought with guns).  There is a scene where one of the male members of the group falls from a ledge into a group of mutants; the rest of the group jumps down to try to save him.  Unfortunately, after a valiant fight, things go really badly.  One guy is killed outright from a minor explosion.  Everyone else who was in the fight, except the woman with the swords, ends up stabbed and dragged off to the machine.  This includes the second woman.  So the mutants weren’t just taking men; they were taking anyone who fought against them.  They were taking soldiers.

So all in all, I was impressed that this level of detail was present within Mutant Chronicles.   At first it appears to be a very stereotypical movie.  But on a deeper level, the mutants were being extremely tactical.  They attacked only those who fought back, thereby taking people who would make the best soldiers.  The mutants were not being sexist – they were just responding to the sexist nature of human culture within the movie.

One response to “Mutant Chronicles”