*SPOILER ALERT to anyone who has never seen The Dark Crystal *

Last night, I was watching The Dark Cystal, a film made by Jim Henson in the early 1980’s.  The movie takes place in a fantasy land and tells the story of Jen, a Gelfling who has to heal the Dark Crystal.  The movie is a lot of fun, with all kinds of interesting creatures (which were designed by Brian Froud, who also designed the goblins of Labyrinth).  I’ve watched it many times since I was a child. 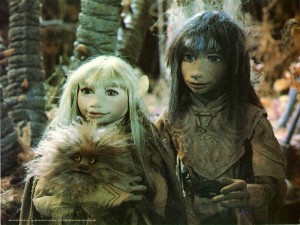 The Gelflings Kira and Jen, with Fizzgig

But last night I was struck by the gender-role reversal within The Dark Crystal.  Jen, the male hero of the show, was almost completely useless.  He had had pretty much no practical life experiences outside of the protection of the Mystics, and so had no survival skills.  Instead it is Kira, the girl he encounters, who helps him complete his quest.  Kira was the one who knew the world, and so she helps him get to the Skeksis’ castle, and she is the one who keeps him safe.  She also picks the crystal shard back up after Jen throws it away in frustration.  When she gets captured by the Skeksis, she manages to free herself; you know Jen would have been doomed had it been he who was captured.

But even though Jen would never have made it alone, it is still he who heals the crystal.  So in the end he still gets to be the hero, even after botching almost everything along the way (including almost botching the healing of the crystal).  I just thought it was interesting to see a movie in which it was the girl who was competent, while the boy was not.  Kira acted in ways which are stereotpically masculine in movies, while Jen was more stereotypically feminine.